At Dignity Pet Crematorium we have always believed that we should be there to tailor our service to your needs. Whilst many families bring their pets to us and have their own private goodbyes in our Farewell Room, some people prefer a more structured religious or non-religious goodbye. Over the years we have been touched by the many different ways people have given their pets a final farewell including Christian, Hindu, Muslim, Sikh, Buddhist and other non-religious services that have taken place in our grounds.

We recently held a service for a family who travelled all the way from Nottingham for their beloved dog, Duke, who they described as their beautiful, darling gentle giant. The Farewell Service was run by Karen Davis, one of our recommended celebrants. The service programme can be viewed here.

He soon became a massive part of our family and was the centre of all our daily activities. He enjoyed three walks a day, two during summer when it was too hot, and trips out. Walks would usually take twice the anticipated time, as countless people would want to come up and say hello to Duke, take photos of, and with him. We even had people stopping their cars to see him and give him a fuss. He loved all this attention as he was such a kind-hearted dog and stunning boy. On our trip to the seaside, he didn’t like the sea and would run away from the waves as they swept up the beach, such a big dog and afraid of the waves. He also had a TV appearance on The One Show on BBC1, they also thought he was stunning was the star of the show!!

After a while we decided Duke needed a doggy companion, so we collected his furry sister Aspen and they quickly bonded. Duke’s kind and gentle nature shone out as he looked after her and helped her to settle in, there was never a cross word between them. Duke’s protective nature made him a good older brother for Aspen, someone she could look up to and for comfort and companionship. When on their walks they were a sight to behold and were given the nickname of ‘The pride of Stapleford’ by local people. When our grandson Oscar arrived, Duke again showed how loving and protective he was, always by his side a gentle giant to look after him. Duke was also like this with all the other members of the family. I always said, “He is a bit like Nana from Peter Pan, always the Protector.”

He was extremely well behaved, very quiet; he was not a dog who barked much. Although playful when younger, he had a calm nature, loving and gentle. For such a big dog he could always be trusted with anyone and anything.

His passing, aged only seven years old, was unexpected and we’re still trying to come to terms with it. I searched for somewhere that would hold a service for him, his passing needed to be marked properly, he was a much-loved family member and as such we needed a proper service for him. Thankfully I found Dignity Pet Crematorium; although I am grateful I did, I am heartbroken that I needed to! When I rang and spoke to Katie, she was fabulous, helping me to express what I wanted for him. She called me regularly and was always interested in how I was feeling; her sympathy and compassion was clear and appreciated. She found a celebrant who would hold a proper service for me, Karen Davis, she was lovely. She called me and we spoke about Duke and his impact on our lives and from this she wrote a wonderful eulogy for him. On the day of his funeral, we followed Duke from Nottingham to Hook in Hampshire and there Karen, the celebrant, was waiting. We had a proper send-off for Duke. We sat in the gardens, due to COVID-19 restrictions, and they brought Duke out and we placed flowers and cuttings from his favourite tree with him and placed photos of him nearby. Karen started the service and then read out the eulogy with ‘Bright Eyes’ and ‘Adagio for Strings’ played as we said our final goodbye to our wonderful boy. Katie recommended a nearby restaurant where we held his ‘wake’. Afterwards, we went back to Dignity to collect him and take him home with us the same day. It was the ‘funeral’ Duke deserved; he was a magnificent, loyal member of our family and he will be eternally missed.

Katie has been in touch since to check on me and listen to me crying, bless her. I/we will never get over the tragic loss of our dear, dear Duke and words cannot express how much he will be deeply missed. Greif is the price we pay for love.

Until we meet again over rainbow bridge my darling Duke.”

If you would like to find out more about a Celebrant Pet Funeral Service, please click here.

Pay Tribute to Your Pet with a Custom Pet Portrait 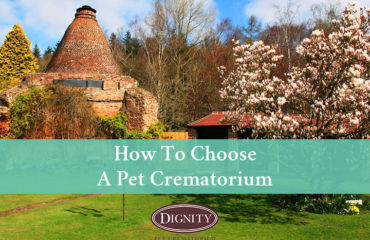 How To Choose A Pet Crematorium